Well I made it! looking forward to this year isn't the word. But don't get me wrong I am nervous, but in a good way. The first week or 'week zero' was awesome! we were told that many of the other courses in the collage didn't do one and all I can say is their loss. Maybe its just because of the course content but I found week zero to be a welcome kick up the ass in terms of getting my brain geared to the method of thinking that i was going to use all the time. Also the idea of bringing in the second years to join us (first years) was great too because not only did i already know one well from my previous college that could help me get a grasp of the design method but when we got switched around these views could be compared with other second years experiences to give me a greater understanding of both what the course was like and what was expected of me. Ill not go into the detail of each of the projects I was involved with in week zero but i can tell you it really did put a lot of things in order in my head. Watching lots of design and painting tutorials on youtube I never REALLY had a grasp of how I would go about putting these methods into a workable design and production line to pump out awesome work. An example of which was, as a keen and budding concept artist I would watch lots of conceptual art tutorials on vehicle or character design. I wouldn't go blindly into it, rather I would sometimes..and i mean sometimes start off with several thumbnails but although i understood the concept of putting shed loads of rough ideas down in abstract or loose form I never really took it seriously and found myself doing two, picking the second one in my head then doing about 3 or 4 more just to decorate the page. At one point during week zero, when we were to come up with 120 loose concepts for the word 'cute' conann (one of our tutors) mentioned that when he was working on a job in the industry he was asked to come up with a silly number of concepts for a scene involving water, 200 odd I think. basically what I took from this story and his explanation was coming up with ideas is like scraping out ice cream from an oil drum. Its easy to scrape out the first 50 or 60 scoops and anybody can, its when you have to really get in there and scrape the last morsels from the bottom do you really find the best ice cream, even when you think there is no more ice cream left. 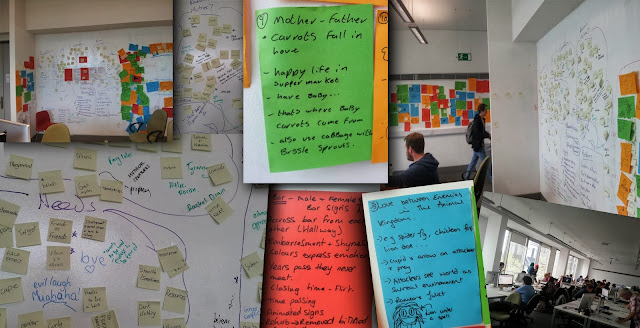 The team in which I ended up in was great as I felt we all seemed to think along the same lines and really did get lost in the idea process. I mean at times in week zero I came in at 10, farted and it was lunch then farted again and it was home time. 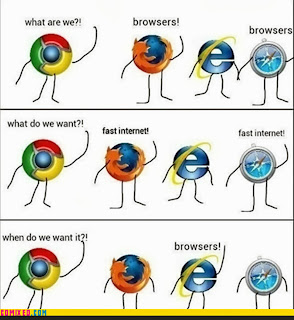 I was getting so into it and having such (as we say in this part of the world) craic! time flew in! although from time to time there was one hicup. As great as the team was there was one guy that didn't seem to always be on the same page as the rest of us. We were going through what was left of the design process after picking up from the last team. So after coming up with several concepts and water tight(ish) story lines for each we would move on the the next. It wasn't like we left him out of the discussions, he did participate but would sometimes go quiet for a while, start talking to someone else or just come in late then jump into the convo with an idea, all be it an idea...but one that maybe could of been useful about 20 Min's earlier! But listening to conanns advice I generally tried not to shoot him down or instantly dismiss him as he was a good guy and his heart was in the right place, but Jesus...get with the programme! We finalised on five of what we felt was our better ideas and it was up to another team, after listening to us pitch each concept, to pick which one we were going to bring to a shippable state. At this point ill be honest. There was one idea that I came up with about a sci-fi villain movie...I mean this thing was epic and I am/was quite proud of it proud to the point that I found myself having to really restrain myself from pushing the idea too much as I knew that it was and always is a team decision. The idea that got picked by the other team was actually what we all agreed was just a filler. We wanted to show a range of concepts form products to phone apps so threw it in there for good measure...so yea it got picked and my first lesson of not getting too attached to one idea because it might be shot down was learnt. The idea that was picked was a villain website. We decided that is was to be a sort of colourful spoof sort of site and not intended for any use in the real world. We would play on all the stereotypical comic villain attributes. while our research into possible layouts of the site was underway it quickly became obvious that we should take influence from the comic book world as comics are the traditional home for villains. 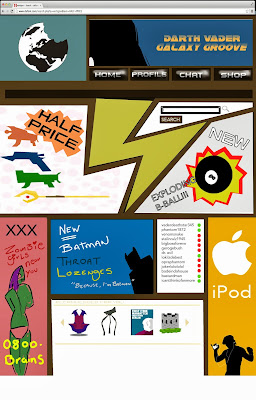 As you can see our final outcome closely resembles a comic book lay out. 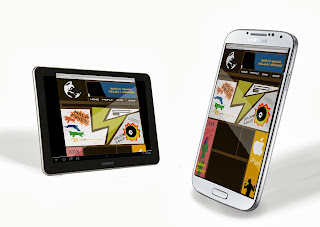 Oh and its also available on your portable android device.

Week zero over, now to get into the real meat of the course. I have to say week zero was great and to be honest I cant imagine starting this course without it! I understand that we are not being marked on it but I took it seriously as if I was. Even writing it into my blog as a sort of 'blog zero'.